The Cost of Icebreaking Services

It’s no secret that global supply chains largely rely on merchant sea ships that transport goods from one port to the other. According to research, almost 80% of the world’s commerce relies on maritime shipping. Each year, ships transport millions of tons of goods; in 2015, 10,047 million tons were transported, and this volume is increasing by at least 10% each year.

Since trade relies on shipping, shipping companies cannot afford to stop shipping services during winter seasons when maritime trade routes are clogged with ice-infested waters. Countries in the Northern Hemisphere, including Russia, Canada, Most European Countries, North America, Sweden, and Finland, depend on water bodies that freeze over during winter.

The Baltic Sea, Northern Sea, Lawrence Bay, Labrador Sea, the Gulf of Bothnia, the Gulf of Finland, and the Barents Sea, among others, are the preferred trade routes in these countries, but they get covered with Ice come winter. Given the dependence on maritime shipping, countries can’t shut down trade. Instead, they use icebreaking services to pave the way for merchant ships.

In this article, we will take a look at what Icebreaking services entail, the costs associated with them, and their increasing importance is given the arctic meltdown. 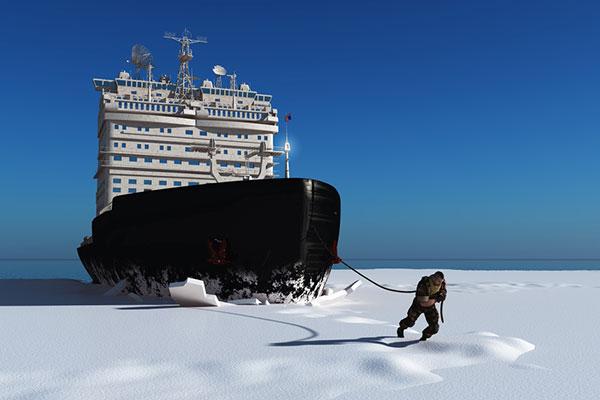 As the name implies, Icebreaking refers to breaking the ice that covers maritime trade routes (seas and oceans) during the winter season. For this purpose, specialized icebreaker ships, that have powerful engines, strengthened hulls, and special ice-clearing shapes are used.

Essentially, icebreakers clear the path of merchant ships by breaking the ice. They are also responsible for helping ships that get stuck in ice anywhere in the world. However, most northern hemisphere countries have their own icebreaking services, national and private.

Canada, Sweden, Finland, USA, and China own icebreaking ships. However, Russia has the most icebreakers in its national fleet, and it’s continuously investing in more. Russian icebreakers often lead US merchant ships when they get stuck in icy northern waters.

The Cost of Icebreaking Services

Although domestic icebreaking is free of cost in some countries (Sweden and Finland), most countries charge an icebreaking fee year-round. In most ice zones, icebreaking fees apply to all commercial cargo ships that carry more than 200 tons of merchandise on-board.

Let’s take a look at the most common icebreaking fee structure.

In Canada, icebreaking services provided by the Canadian coast guard cover three areas. The details of which are given in the table below:

Apart from these dedicated areas, Canadian icebreakers may also venture beyond to help vessels during an emergency. The standard rates of Canadian Icebreaking services are:

In Sweden, the state-owned icebreaking services are provided free of cost provided that the ships are ice class. Specifically, it provides services in the Baltic Sea, Lake Vanern, Lake Malaren, and the Angermanalven River.

If a ship does not meet the requirements set by the Swedish Maritime Administration (SMA), the organization reserves the right to deny icebreaking services to that vessel.

Russia has rapidly risen to the top of Icebreaking services as it seeks to dominate the newly opening artic trade routes. Currently, the Russian Icebreaking fleet consists of 40 ships out of which 27 are polar icebreakers (heavy/ocean-going icebreakers), and some of them are even nuclear-powered.

Additionally, around 11 new icebreakers are under construction at the moment. Icebreaking in Russia is also state-owned but not free of charge for commercial vessels; a coefficient of 0.8 is applied to navigation dues for icebreaking services. Commercial ships must pay this fee when they enter Russian ports.

The US Coast guard has small icebreakers but only one heavy icebreaker, which reduces its ability to rescue ships stuck in ice.

Scientific evidence shows that our world is steadily becoming warmer. The most valid proof of climate change is the rapidly melting ice in the arctic region. Although a cause for grave concern, it does open up some opportunities as well.

The biggest opportunity is shorter maritime trade passages between North America, Russia, Europe, and Asia. The Northwest Passage (NWP) is a trade route that shortens distance up to 33% as compared to the currently used Northern Sea Route (NSR).

China and Russia are both very interested in this newly opened sea route as it would drastically reduce the cost of shipping as well as shipping lag time. But for this route to be operational, powerful icebreakers would be needed to clean the ice.

In a bid to dominate the northern passage, Russia is adding icebreakers powered with nuclear energy to its fleet each year. Similarly, commercial icebreaking companies are also interested as it means a bigger payday.

The opening of the Arctic route creates new possibilities for trade and supply chain management; however, the cost of icebreaking services remains a question. Will the increased icebreaking requirement mean higher charges for commercial transits?

Therefore, governments must invest in research and development to find cost-effective icebreaking methods.

Nouman provides ghostwriting and copywriting services. His educational background in the technical field and business studies helps him in tackling topics ranging from career and business productivity to web development and digital marketing. He occasionally writes articles for a software company in Pakistan.