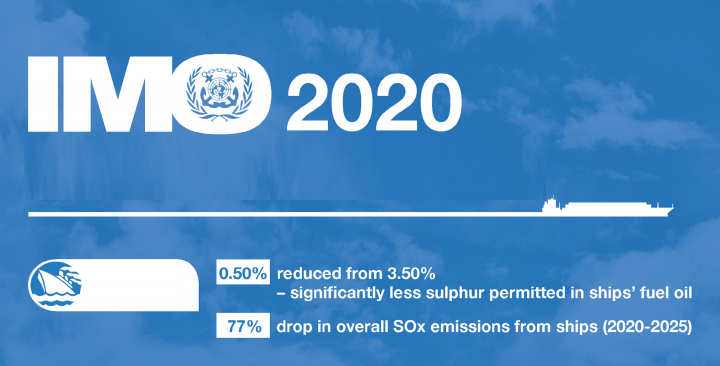 The new International Maritime Organization (IMO) Low Sulphur Regulation will be effective from 1 January 2020 and will require all shipping companies to reduce their Sulphur emissions by 85%.

The official announcement was published on the IMO website. You can download the full PDF with details from our library. 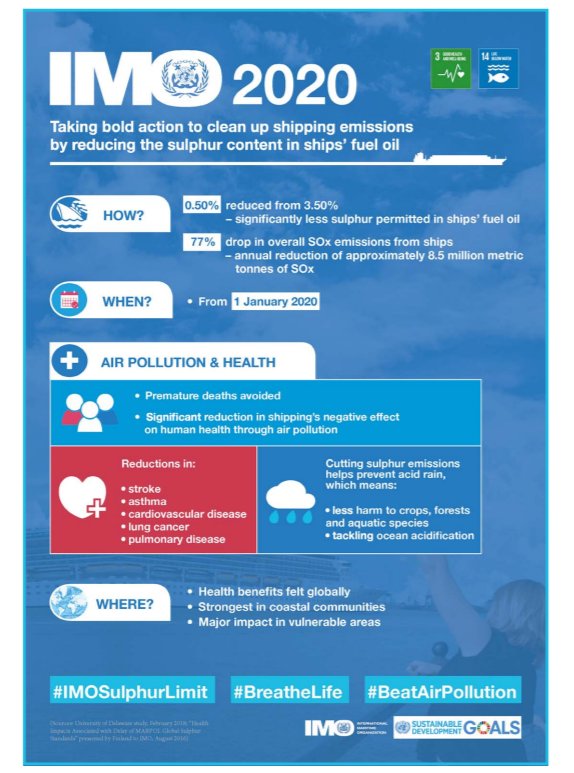 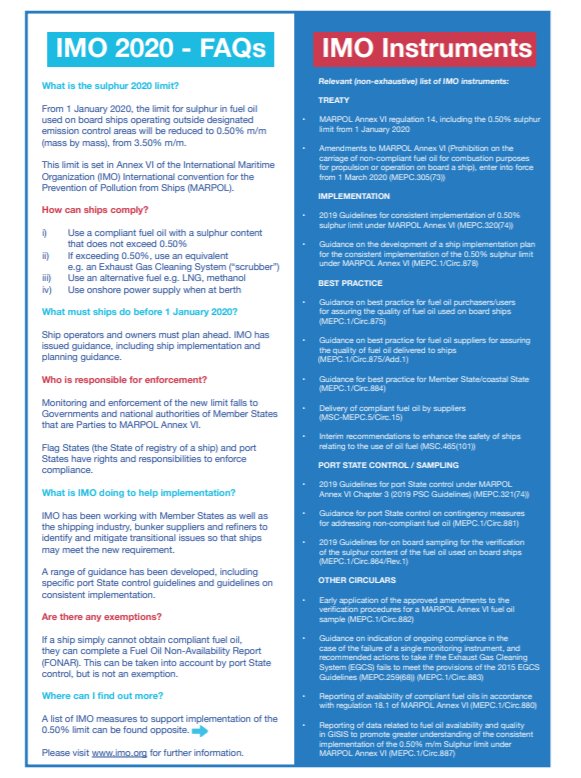 The sea shipping industry is a key driver of the world trade, as it accounts for about 90% of all goods transported. Given the global trend of switching to energy production of clean fuels,  since the 1960s the International Maritime Organization (IMO) is developing measures to reduce the negative impact of shipping on the environment. From 1 January 2020 the IMO stricters rules, seriously reducing the maximum sulfur content in marine fuels (bunker fuels) from 3.5% to 0.5%., which will have a positive impact on the environment and health of people all over the planet.

IMO 2020 consequences for shipowners and refineries

What does this specifically mean for the shipping industry and oil refining industry? Today, the shipowners need to decide whether they want to continue to use the sour fuel oil in combination with the possible use of scrubbers to purify exhaust gases, or they need to shift to fuels with low sulfur content, including distillates and liquefied natural gas.

Priorities of the main participants will lead to a dramatic change in the structure used in the marine fuel demand, and will have a direct impact on the refining worldwide.

Time is working against, both shipping companies and oil refineries. Objectively speaking, if the modernization of refineries, aimed at reducing the production of high-sulfur fuels (HSFO) has not yet begun, these works  will not be held in the required time - until 2020. A recent Drewry survey shows that by January 2020, two-thirds of shipowners are prepared to bunker their ships with more expensive fuel of low sulfur content (LSFO). At the same time 66% of respondents said that low-sulfur fuels is a viable solution for their ships, while only 13% of respondents intend to use scrubbers to be installed on their ships, and only 8% of respondents would prefer, as an option, the use of liquefied gases.

Studies of the Swedish company SEB show that by 2020, less than 2000 vessels from the entire volume of the merchant fleet (around 60 000 units.), will be equipped with scrubbing system. Considering the existing production capacity of scrubbers in the next few years we should expect their shortage, which will lead to higher prices for low-sulfur fuels (LSFO) and, consequently, to an increase in financial expenses of shipowners.

CMA-CGM shipping line explains it in a very good manner:

IMO regulations is about to come into effect. Too little time is left to initiate and implement projects to upgrade, modernize refineries, which would become one in the long term. In this case, oil refining, ship owners and shippers need to find urgent solutions sour problem fuels for ships.

SeaRates developed the following low-cost and short-term solutions to address this problem, that can be realistically implemented in refineries until 2020:

- the use of new components and catalysts which can provide hydrocracking and hydrotreating of the heavier and more complex materials such as bitumen, heavy vacuum gas oils

- mixing the oil stations may become extremely economical and effective way of bunker fuel, which would correspond to the quality requirements (ISO8217) and environmental requirements of IMO-2020. According to the study, bunker fuel with a sulfur content from 0.1% to 0.5% can be obtained using a wide range of petroleum products to be mixed, in contrast to traditional naval distillates. Such modeling process involves the mixing of the treated light oil treated with kerosene and light distillates, residues, and so on.

- the crude oil mixing station to include raw fraction with a lower sulfur content and / or higher price discount. For a typical refinery with a capacity of 200,000 barrels per day, adding only 10% of raw oil at a discount of $ 1 per barrel, can increase the gross margin refinery by about 7 mln. US dollars per year.

As for shipowners, many of them are planning to invest in scrubber technology, and already preparing their vessels for installation. However, scrubbers are now installed on more than 1% of the total number of vessels, and industry analysts predict that by 2020 the number is unlikely to exceed 10-20%.

Requirements to be implemented first

That is why the business cooperation between the refineries and shippers, including long-term contracts and joint investment can be an effective method, which enables cost-effectively comply with IMO requirements, namely:

- suppliers of bunker fuel are required to create a separate system of logistics for the high and low sulfur fuels, depending on the contractual obligations and anticipated market consumption of the shipping industry.

- some refineries may be profitable to invest in scrubbers installation  on the ships, taking into account the long-term agreements with shipowners for the supply of high sulfur fuel.

- some shipowners may be advantageous to invest in mixing processes in petroleum refineries to produce low sulfur bunker fuels, which would meet the requirements of IMO 2020.

It is also necessary to note the lack of uniform standards for the many new types of marine fuels, proposed by refineries. There are also a potentially serious safety concerns, including those associated with the use of disparate silos. 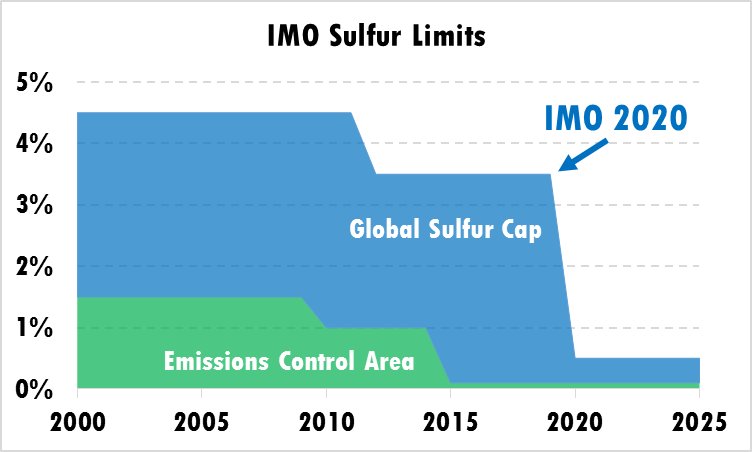 Taking into account the fact that the new rules definitively come into force from January 1, 2020, without any grace or transition period, significant changes in the fuel market for marine vessels can occur already now.

Other impacts of IMO 2020 regulations

New rules of International Maritime Organization (IMO) on the sulfur content of fuel, which will come into force on January 1, 2020, can cause a deficiency of diesel fuel in the world market. The analysts shows that the demand for diesel oil and fuel oil with low sulfur content abruptly rises at 1.6 million barrels per day.

Under the new IMO regulations, only the ships with engines which use a fuel with a sulfur content of 0.5% or lower, whereas the allowable sulfur content of the existing rules - 3.5%, will be allowed to sail. Tightening of requirements related to the fact that the organization intends to halve greenhouse emissions of the world fleet by 2050.

In IMO, of course, they understand that simultaneous transition of the entire maritime transport to the use of low-sulfur fuel is technically impossible. Therefore, the ship owners will be allowed to observe the old guidelines provided to install special scrubbers for trapping sulfur compounds in the exhaust of engines.

However, most owners are likely to start purchasing low-sulfur diesel fuel for their vessels, which is now almost entirely goes to refuel vehicles, according to the Oil Price analytical resource material.

World fleet consists of 90 thousand vessels of all types and sizes. Of these, 60 thousand are engaged in commercial transportation by sea, and almost all of them use traditional marine diesel engines. And most likely, the majority of them will switch to low-sulfur fuel, seriously increasing the burden on oil refining. 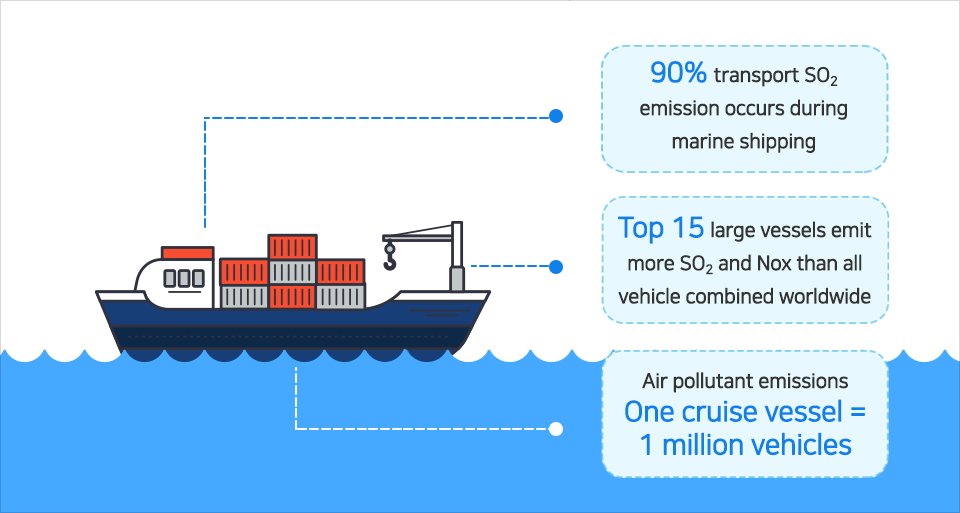 As a result, there is a risk of fuel poverty for a while until the refiners do not compensate for the increase in demand. And the prices for diesel and fuel oil, more likely, will seriously jump.

By the way, European refineries are not the only ones which will benefit from this increase in consumption. US refineries are also going to take advantage of it, even though it cost them quite expensive.

After all, they have already passed a modernization, when the first regulations on the sulfur content in the exhaust of diesel engines in the United States entered into force in 2006. Refineries now have to re-invest in the modernization of the equipment and increase purchases of light crude oil.

However, the recent voices of experts who predict that liquefied natural gas LNG fuel will soon replace diesel fuel and fuel oil from ships' engines. But, this is unlikely to happen really soon.

Currently, only 125 ships around the world go to the LNG fuel. However, 2020 is expected to launch another 400 such vessels, but it's still a drop in the sea.