Anybody involved in the shipping business can scarcely perform his job without being fully conversant with at least the basic concepts of international maritime trade.

First of all, it should be pointed out that international maritime trade concerns not only buyers and sellers but also other interested parties such as shippers, receivers, banks, shipowners, insurance companies, and so on, located in different countries all over the world, each one governed by different laws and customs.

Financing and carriage by sea must therefore be internationally ruled in such a way as to guarantee that:

Buyers and sellers generally stipulate a contract of sale with particular reference to the INCOTERMS (International Commercial Terms), which provide the correct interpretation of the clauses these types of contract contain. (The INCOTERMS are usually reviewed and up­ dated every 10 years by the International Chamber of Commerce, Paris.)

The next step is the contract of finance which the buyer stipulates with his own bank. In turn, this bank (the issuing bank) makes the necessary arrangements to liaise with the seller.

The contract of finance is ruled by the "Uniform Customs and Practice for Documentary Credits: ICC Brochure 600 CUCP600’ for short)" a convention between the International Chamber of Commerce and the international banking system.

The owner of the goods, buyer or seller as the case may be, then stipulates with a named shipowner or carrier the contract of carriage.

The evidence of the stipulation of a contract of carriage is the bill of lading. This is ruled, variously, by:

A universally accepted system of coverage(s), namely a complex of formal and substantial guarantees ruled by the UCP 600, has gradually come into existence, limiting the risks for either party to the contract of carriage.

The parties to guarantee these coverages are:

b) The Shipping Companies

Since the contract of sale is in most cases stipulated with a totally unknown seller, the buyer requires the coverage and backing of an international first-class bank (the issuing bank), which is to provide funds required to:

a) open a letter of credit

b) guarantee an open credit, if required

The letter of credit is the most common means of payment in international trade. It is, at first, simply a contract of finance between the buyer and the issuing bank, but as soon as it has been issued, it actually becomes a contract between the advising bank and the seller.

In this way the seller is fully guaranteed by the advising bank that he will receive the agreed price of the goods immediately after the cargo has been shipped. (This is the reason, incidentally, why shippers usually keep pressing agents in order to ensure that their bills of lading are marked with a shipped on board stamp) The shipper, however, must be in a position to comply with the following essential conditions:

As far as the buyer is concerned, when he purchases cargo by means of a letter of credit he must ensure that he has obtained from the issuing bank, in addition to the financing, also the best rate of exchange.

By issuing a letter of credit in favour of the seller/exporter in his country through the advising bank, the issuing bank does in fact guarantee the payment to the beneficiary (seller/exporter).

The guarantee of the issuing bank may be considered fully operative only when an irrevocable and confirmed letter of credit has been issued, which can be either a sight credit (payment in return for documents) or a term credit (when the bank accepts the documents as being compliant with the requirements of the credit and agrees to pay the seller at some certain future date).

To avoid any risk, and to provide their buyers with the maximum possible coverage, banks are expected to comply 'literally' with the instructions received. All documents prescribed by the letter of credit must fully correspond to the instructions of the buyer. If any word or name, for example, is erroneously mentioned in the letter of credit, then it must be mentioned in the same erroneous way in the bill of lading. In fact banks are not concerned if a shipment is in conformity with the documents, but only that the documents are in conformity to the wording of the credit.

By so doing, banks provide the most accurate and efficient coverage of the buyer’s interests.

Among the documents prescribed in the letter of credit, the bill of lading is by far the most important.

Usually, the following additional documents are requested by letters of credit:

The seller/exporter is due to produce to the advising bank the same number of the originals and the not negotiable copies of a clean bill of lading (i.e. not claused with any remark about the condition of the cargo) as are set forth in the letter of credit.

The b/l must be issued to order and blank endorsed (i.e. just signed and stamped by the shipper on the back of the front page, with no other indication).

The advising bank will then acknowledge that the cargo has been actually shipped and release the amount involved.

Thereafter, the advising bank will claim from the issuing bank the refund of the amount advanced.

Upon recovery from the buyer of the agreed amount, the issuing bank delivers all the documents to the buyer, thus enabling him to obtain from the carrier's agent at the port of destination the re-delivery of his cargo.

The term re-delivery is the correct expression to signify that the cargo was delivered by the seller/shipper to the carrier, was kept in custody by the carrier from the moment it was consigned for shipment, and that the carrier remained in ‘possession’ of the cargo until it was re-delivered to the buyer/receiver.

Should the buyer become insolvent, the issuing bank is still obliged to refund to the advising bank the amount advanced on its behalf. However, since it is in possession of the b/l originally released to order and blank endorsed by the shipper, it will be entitled to take delivery of the cargo from the carrier and sell it by auction to recover its loss as best it may.

In general, the Banks keep the cargo under close control, and will not release it unless they have recovered in full from the buyers the amount they have guaranteed and advanced.

Banks are, however, not interested in getting involved in the contract of carriage, given the many protective clauses it contains (see a specimen of the back of the front page of the B/l, appearing in the appendix).

In modern maritime trade, the submission to a bank of an original bill of lading stamped shipped on board, is the most important coverage for both the buyer and his issuing bank.

The b/l represents confirmation of shipment released by a neutral body - i.e. the carrier. He thereby certifies that the cargo purchased by the buyer/importer has actually been shipped on board a given vessel within the time limit established by the letter of credit and that the same cargo is expected to arrive at the indicated port of discharge.

Nevertheless, the letter of credit is definitely an expensive financing instrument. Alternative means of purchase are:

a) open account trading, whereby the seller is supposed to send the documents to the buyer, so that the latter may arrange for the payment within the terms agreed in the contract of sale.

b) payment in advance, whereby the buyer remits the necessary amount to the seller, who is to arrange the shipment in accordance with the agreed terms.

c) cash against documents, whereby all the documents relating to the shipment are submitted to the advising bank as confirmation that the goods have been actually shipped, leaving it to the bank involved to collect from the buyer the amount due.

The complete sale and purchase procedures, as well as those concerning the import/ export: 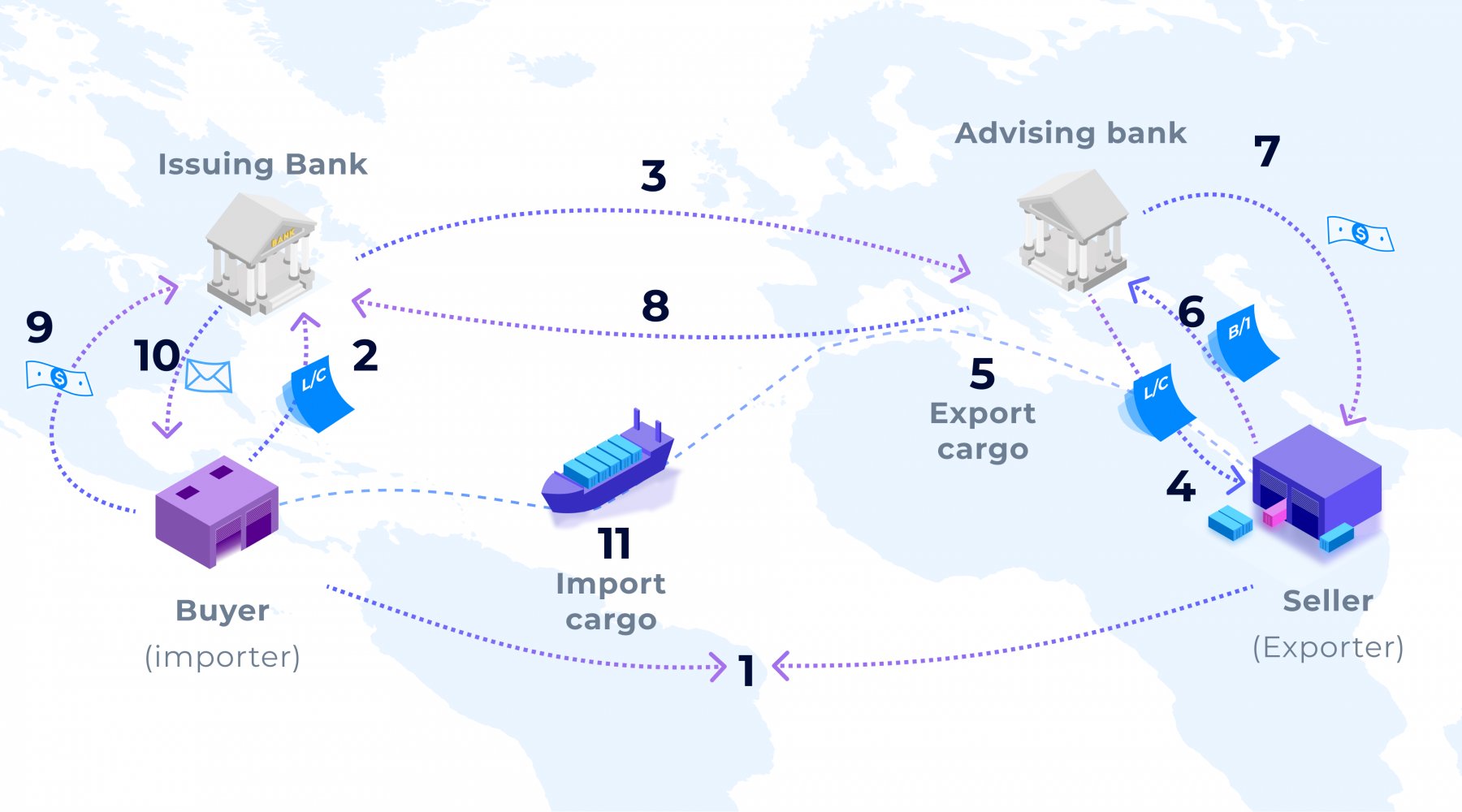 1. Seller and buyer stipulate a sale contract against payment by letter of credit ;

2. The buyer applies to his bank (the issuing bank) in his country of residence with a view to obtaining a letter of credit in favour of the seller(beneficiary);

3. The issuing bank instructs the Advising Bank to inform the seller about the opening of the letter of credit;

4. The advising bank sends the letter of credit to the seller and advises him about the agreed terms and conditions;

5 If the terms of the letter of credit correspond to those agreed upon in the contract of sale, the seller then makes ready the cargo and the necessary documentation and delivers the cargo to the carrier in the port of loading;

6. In order to be able to collect the credited amount, the seller submits to the advising bank the bill of lading, together with the full documentation as set forth by the letter of credit, to provide evidence that the goods have actually been shipped;

7. The advising bank, having checked that the submitted documentation does in fact correspond to the terms of the letter of credit, then proceeds with the payment;

8. The advising bank sends the full documentation to the Issuing Bank, which in turn checks whether all the conditions of the letter of credit have been fulfilled;

9. The issuing bank then charges the buyer’s account with the full costs of the operation;

10. The issuing bank releases the documents to the buyer;

11. The buyer submits an original bill of lading to the carrier in the port of discharge to obtain the re-delivery of the cargo.

In maritime trade the shipping companies, whose task is to transport cargo to all parts of the world, obviously play a central role.

Moreover, by retaining possession of the cargo until re-delivery to the legitimate party, the shipping companies in fact certify that the cargo is no longer under the seller/shipper’s control.

Quite evidently this is the best guarantee, for both the buyer and the issuing bank, that the cargo can be re-delivered, without running any risk, to the party presenting an original bill of lading to the shipping company's agent at the port of destination.

The role of the insurance companies is to provide a full guarantee to banks and to buyers that any risk to the cargo during the combined land and sea transportation is covered by the payment of the relevant insurance premium.

It goes without saying that without adequate insurance cover no bank would agree to stipulate a contract of finance, on behalf of a seller, with any buyer.

Marine insurance is a practical necessity: without insurance coverage, the credit system would almost certainly collapse.

Insurance companies, however, are keen to ensure that they may have the possibility of recourse under subrogation to the carrier to minimize their exposure.